Back to Basics - the Simpler, the Better 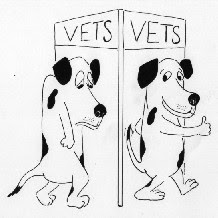 Whilst listening to Radio 2 the other day I heard a very interesting interview with Noel Fitzpatrick, Channel 4's 'Super Vet'. He was talking about his new TV series (of which I have yet to catch an episode) and my ears pricked up for several reasons - his obvious enthusiasm, love and devotion to his job; the lovely Irish lilt in his voice, which carried a real smile; but mostly because of something he said which really struck chord with me.

Noel was asked if he had ever come across a case which he didn't know how to treat, and it was this reply which will stay with me for a long, long time.

He said, 'People don't care what you know, they want to know that you care. That's the trouble with the medical profession these days - there's no point in having all this knowledge and qualifications if your bedside manner is zero. What's wrong with giving someone a hug in their time of need?'

He went on to say that because animals can't tell you what's wrong, vets have to really rely upon their senses to make a diagnosis - touch, sound, sight, smell, and their intuition. How very Five Element!

It just so happens that my late Father was a vet, and I was all set to follow in his footsteps until my body decided that it wasn't a great career choice for me (severe allergy to animals!). I used to spend as much time as I could with my Dad whilst he was working, despite the sneezes and wheezes. He was very much 'old school' in his approach and I remember him saying over and over how important it was to use the senses before anything else. He would despair at the new graduates came to work with him as they would run up enormous lab bills with blood tests, x-rays etc before even hinting at a diagnosis, and then they would proceed to prescribe very sophisticated (ie expensive) drugs. Dad always stuck to the generic forms - simpler, effective and much cheaper, and resorted to using the branded medications as a back up.

One other characteristic which my Dad definitely possessed, which I sensed this Vet also had, and which I aspire to possess - is courage. How courageous is any person who takes on cases when others have failed, given up on or who have shied away from, be it through fear (of failure) or lack of knowledge.

Our practice is a life long lesson which we undertake with honesty and humility. Often the most valuable lessons we learn are not through study or university, it is through life itself and our patients. It is up to us to be open and receptive to this knowledge, and never arrogant in assuming there is nothing more to learn.

Searching for the lost Mojo

'All illness comes from within, so don't just scratch the surface.'

I came across this statement the other day and it got me thinking. Of all the patients who have presented with physical symptoms or chronic medical conditions, I can safely say that in every single person there was a significant emotional undercurrent present.

These heightened emotions arise from a wide range of situations, most commonly relationship difficulties, bereavement, stress (financial, and work-related) and detrimental life-style factors.

The ancient Chinese were the first to recognise the correlation between emotional health and physical health, which is why Five Element Acupuncture is concerned with regaining a better emotional and spiritual as well as physical balance.

Many of my patients found they were able to talk about their emotional issues during their first acupuncture appointment, and for some it was the first opportunity they had had for years to 'get things off their chest'. What the sessions offer is the opportunity and time for patients to say whatever is on their mind, in a safe place where they can be heard without fear of being judged or discriminated against. There is no prescriptive advice offered, merely encouragement to discover alternatives and explore options.

The result is usually a mixture of relief, as if a huge weight has been lifted; clarity, with a plan for a way forward; an increase in motivation, self-awareness and self-esteem - and exhaustion, always!

And why exhaustion? Think of all of your holiday stuff being packed into a bag and held out at arms length. It's not how big or how heavy the bag is that matters - it's how long you hold it for. You have to let it go eventually to give yourself a break. Same goes for your emotional baggage.

We all deserve to give ourselves a break sometimes.