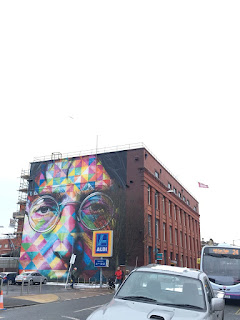 My practice is incredibly busy. In addition to my Garden Room Clinic, I still hold a low cost clinic on Tuesday afternoons/evenings in its town centre location at Quay Place www.quayplace.co.uk, where the 30-minute appointments are idea for those with limited time or resources, or who happen to work close by.

Interestingly though, I find more often than not that patient prefer to come for longer sessions at my Garden Room Clinic www.jobanthorpe.co.uk. I am increasingly aware that patients really want to be listened to, and indeed they have a lot to say. Many do not have the opportunity o the appropriate circumstances in which to tell their story and to feel that they have been heard - a practical impossibility in a 10-minute GP consultation.

I am also aware that more and more people working in the medical profession are looking beyond drugs to help with their mental and physical health. I already treat a number of healthcare professionals who have turned to acupuncture in preference and/or in addition to the western medicine approach of drug therapy, and have recently been invited to explore the possibility of delivering acupuncture to the staff at my local hospital as part of their wellbeing regime.

Whilst I have utmost praise for the NHS and think they deliver an excellent service the majority of the time in acute cases, where I think they could do better is in the long term management of patients whose medical conditions require them to access multiple departments. There can be a very apparent lack of joined-up thinking, a lack of continuity with no one clinician overseeing the treatment and with a strong tendency to quickly escalate the strength and quantity of medication. Patients are left highly medicated, often with complications and side effects which require additional medication, but are in receipt of very little, if any emotional support.

In my practice I have come across a great number of patients who are living with extremely complicated and debilitating conditions. Many have been prescribed a cocktail of powerful drugs but increasingly they experience little, if any respite from their symptoms despite dutifully taking their medication.

If a patient is willing to take the time to research their condition and treatment options in order to make an informed decision, and is willing to pay for private alternative therapy, then why wouldn't the NHS embrace an action that would take the onus off a system which is on its knees. In a struggling health service which is stressed and over-stretched, we are now in an environment which acknowledges the connection between emotional wellbeing and physical health.

I can understand a clinician's reluctance to allow patients full autonomy in view of the blame culture in today's society, and fear of legal action. On the other hand however, I find this surprising and rather narrow-minded as many patients are very keen to take responsibility for their own physical and emotional wellbeing, and I feel they should be applauded rather than reprimanded for wanting to do so.

Some of my recent experiences involve patients who have turned their back on conventional medicine in favour of acupuncture, on finding that they experience little or no lasting benefit from their meds, and in some instances when the prescribing has been nothing short of heavy handed. Where a patient has taken it upon themselves to explore a different route, their actions have often been severely frowned upon by their medical practitioners.

A recent patient suffering with alopecia totalis came to me after she was due to be prescribed a powerful immunosuppressant drug (usually given to transplant patients to prevent rejection), purely on the basis that one of its side effects was excess hair growth. She decided against taking the drug and is now doing very nicely after a course of acupuncture treatment. She is much less stressed and anxious and is now more accepting of her current reality and less impatient with the wait for hair regrowth.

Another patient had a very painful non-malignant melanoma in the brachial plexus of nerves in the shoulder area. She was told it was inoperable due to the proximity of nerves and was prescribed very hefty painkillers, which made her feel lousy. She was scheduled to undergo radiotherapy in an attempt to shrink the tumour. The patient realised that the medication side effects far outweighed its benefits and made the decision to reduce the medication, despite strong reservations from her consultant. Since receiving treatment, she has been able to cease all medication, has made significant lifestyle changes and is pain free. She is also refusing the radiotherapy, much to the disgust of her medical team.

Most recently I treated a young teenager who has a connective tissue disorder which leaves her with many symptoms including constant, severe joint pain. This has severely impacted her ability to attend school and has had a very negative effect on her emotional wellbeing. She had been subjected to innumerable tests over the years and was prescribed some very heavy duty medications, requiring fortnightly blood tests. All of this has left her feel low in energy and spirit, and utterly exhausted but with very little respite from her symptoms. Her parents made the decision to withdraw from treatment in favour of a less invasive, alternative therapy approach and were threatened with legal action by the hospital if they did so! I saw her  for treatment and she says she feels so much better now that she has stopped taking the drugs. She loved the acupuncture treatment and felt very calm and relaxed afterwards.

And finally, a patient who was, according to her GP, addicted to the painkillers she had been taking for many years for her constant severe headache. She was told to stop taking all medication completely and to  'ride the storm' of withdrawal, having been offered no back up or support. When I saw her she had been struggling enormously after only a few days without drugs, but this was very quickly resolved with a simple de-tox treatment and nourishment for her constitution. When she came for her next treatment she looked a different person - lighter, happier and had felt well enough to wear make up.

I am at times horrified to hear of the over-prescribing of drugs and the seemingly heavy-handed approach by the medical profession, who often do not take kindly to being questioned, and often take umbrage should a patient show a desire for autonomy. I think patients should be applauded for wanting to take responsibility for their own health and for being willing to explore different treatment options. I think one of my roles as an acupuncturist is to support them in their decision, but certainly not to influence them in any way.

I am delighted to have been able to help these patients with some very simple Five Element treatments and to give them the encouragement they need to find their own treatment path. I feel both honoured and humbled to be asked to accompany them along their journey to recovery.

Posted by Jo Banthorpe at 14:36 No comments: 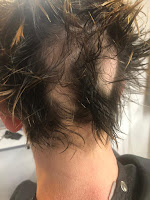 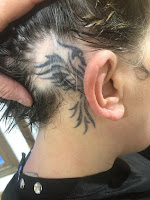 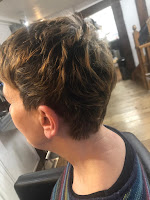 So, despite my best efforts at upping my self-care, my old friend alopecia has now taken a firm hold once again.

Whilst I'd been aware of the signs for a while now, I guess I'd still held an element of denial - hoping that it would resolve by itself and quietly disappear. Not so - clearly there was room for far more work to be done, and I needed to take this much more seriously.

It's not that I'm stressed or anxious about the bald patches though, as I feel I've fully embraced and reconciled the emotional impact of the hair loss. The fact is that my hair is falling out at a rate that is not normal, and whilst I feel fit and well in myself, my body is clearly in distress and is shouting for help.

The body is very good at telling us when things aren't right by giving us symptoms and/or pain. However, we're not always very good at recognising or heeding the warnings, and have the habit of pushing through and carrying on regardless.

Time then to make a step change. I decided to pay close attention to my body - after all, I'd be a fool not to listen to what it is telling me.

So time to up the ante.

Whilst I've always maintained regular acupuncture treatment with Caroline Shepherdson www.purelyacupuncture.com every two months, I have to admit the daily guided meditations (Headspace www.headspace.com) have gone a bit by the wayside. But I have been doing weekly HIIT sessions with Ted www.vitalexercise.com for the past year and just LOVE my monthly reflexology/massage treatments with Tracey www.facebook.com/tracey macrae wellbeing.

It was time to pay a visit to scalp and hair loss specialist Cheryl www.cmhairloss.co.uk, whose late colleague Peter Bannister had first treated my scalp back in 2016, with excellent results. Cheryl uses gentle and natural products to improve the condition of the scalp and promote hair growth.

Her analysis of my hair concluded that whilst some follicles had been affected by hormones and stress, by far the greater problem was malnourishment - my remaining hair was thin, weak and malnourished. As it happened, I'd already made the decision to see a nutritionist, Fiona www.thenutritiondetective.co.uk, as I'd become aware that something wasn't quite right with my digestive system. Knowing that gluten and dairy are common culprits, I'd tried avoiding these in the past but felt I needed more expert guidance on this.

Fiona concluded that my bloating was a result of low stomach acid - the initial digestive process was inadequate so that food was passing out of the stomach only partially digested. This was remedied by a simple hydrochloric acid supplement taken with each meal.

My floating stools were a result of poor fat absorption, possibly as a result of compromised liver function due to Hepatitis A infection in childhood and long-term antibiotic use after rheumatic fever in early adulthood; not to mention low birth weight and failure to thrive as an infant, and four pregnancies (including twins), all of which hammered my body at the time.

This has all lead me to better understand my alopecia. Predominantly it tends to be stress related, but I knew that mine had happened at a time when I had very little stress in my life and I felt (and still feel) very calm, so I was rather puzzled as to why it happened when it did.

I realise now that nutrition plays a hugely important role. I was convinced that my diet was very healthy - which indeed it is - but if my digestion wasn't up to scratch then it was obviously leaving my body depleted and wanting.

A regime of supplements and slight tweaks to my diet has already improved my skin, which was prone to dryness and itching. The scalp treatments are optimising the condition of my hair follicles and hair is beginning to grow back at the edges of the bald patches. And my amazing hair dresser Lucy www.facebook.com/joshua c constantly comes up with styles which are kind to my hair and keep it looking edgy.

As an acupuncturist myself, I have come across practitioners who frown upon patients who have treatments with several different therapists at the same time. I agree that it's not easy to determine whether any one therapy is making a difference as the waters can become rather muddied, but I feel that sometimes a broader approach can be beneficial, as long as the therapies undertaken compliment each other, rather than duplicate or contradict.
I will continue to look after my general wellbeing with good diet, exercise, relaxation and acupuncture. It's very easy to become complacent when things are going well but it's important not to let self-care slip. If we do, we will regret it and pay the price.

Posted by Jo Banthorpe at 06:54 No comments: